Progress of the £1.7m project to stabilse hillsides in Portknockie can now be monitored by residents and visitors with the opening of an information centre.

Located within the former harbour office in Portknockie, it was formally opened yesterday by Keith and Cullen councillor, Ron Shepherd.

Visitors will be able to see the engineering techniques being used to stabilise the soil bank, and a daily progress update, with pictures and a project timetable.

Cllr Shepherd said he was pleased that the public would be kept informed.

“This is a vital piece of work that will provide peace of mind for residents here,” he said.

“£1.7 million is a lot of money in these straitened times, but frankly there was little choice if we were to provide a permanent solution. This information centre will hopefully help to demonstrate what that money is being spent on.”

Abseiling access drillers working for main contractor Morrison Construction will be driving long galvanised steel pegs – some as long as five metres – into the hillside. Over 260 of these pins will retain a net to secure the hillside and significantly reduce the risk of any further landslide.

The technique has been used with great success elsewhere in the UK. Moray Council’s senior engineer, Will Burnish, said this was the biggest project of its type the authority had undertaken.

“Without this work, any further slips would mean the loss of part of the road. The scope of the project includes stabilising five landslips, improving the drainage to reduce the risk of more landslips, and creating a new road to the harbour to be used when the existing one is temporarily closed to complete the works.”

The scheme is expected to be completed by the end of July.

Cllr Donald Gatt,, who originally proposed for the works to go ahead a year ago this month, said: “I’m glad to see this work under way at long last. Portknockie residents have been worried over the landslips.” 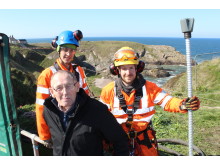 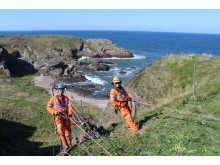 Josh and Kyle on the rope... 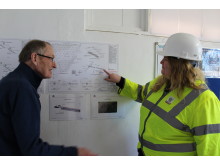 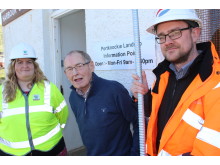