Spectators gathered on the quayside at Buckie harbour in warm sunshine as the Lord Lieutenant of Banffshire, Clare Russell, smashed a bottle of Scotch whisky over the bow of MV Selkie.

Among the crowd were pupils from the local Cluny Primary School who chose the name for the vessel, which was custom-built built at the nearby Macduff Shipyard facility in Buckie.

Guests were welcomed by Moray Council convener Councillor Allan Wright and the vessel and her crew were blessed by Findochty and Portknockie minister Dr Rev Hilary Smith.

The Selkie – whose name is borrowed from a mythical Scottish sea creature – is Scotland’s only council-owned dredger.

As well as dredging Moray harbours, it will be available to carry out dredging operations elsewhere around the coast.

The 90ft vessel is a replacement for the ageing Shearwater which the council disposed of three years ago after many years of service.

The Selkie, which has a three-man crew, is capable of dredging to a depth of nearly 30ft with its bow-mounted excavator. 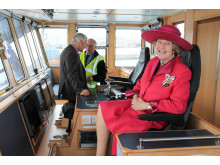 Clare Russell on the brid... 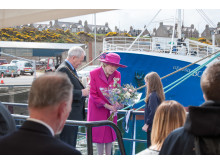 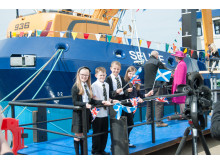 School children at the la... 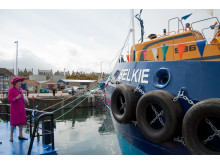 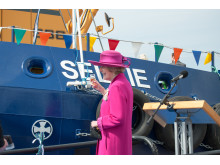 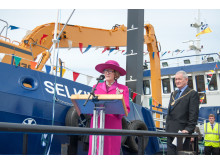