Money for Moray is a new initiative that lets the community decide which local projects will boost the area’s economy.

The Moray Council has match-funded a Scottish Government grant of £60,000 for the area to support projects approved by the community.

The initiative is being administered by a working group consisting of volunteer representatives of community groups in Moray, supported by Moray Council’s Community Support Unit.

Any local community, voluntary or non-profit organisation can apply for funding, from £200 to a maximum of £5000.

Projects should provide economic benefit for as many people as possible from across the community, and help improve the area as a place to live.

Whether you want to start up a childcare club in your local hall, put up story-telling boards on well-used footpath, begin a community café or bus club, if it brings some economic development to your area it could attract funding.

Groups with projects based in the towns of Elgin, Keith, Lossiemouth, Forres and Buckie are ineligible to apply as these areas already have access to economic development funds via the Four Towns Partnership fund and Elgin BID. However, if your group is based in one of these towns and is planning a project outwith the town boundary it may be eligible.

The first Money for Moray pilot project will lead to a public event on Saturday 28th May in Grant Hall, Rothes, where those in attendance will vote on which applicants should receive a share of the fund. A second event will follow later in the year.

Application forms are now available, with a closing date of 22nd April for the first round of grants. Forms are available from this link: 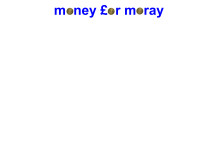