Moray Council is investing more than £850,000 in a Forres business park to meet demand for industrial units.

Following upon the success in developing and letting four factory units to small businesses at Waterford Circle in 2013/14, a further development of five units is currently under construction.

Once completed the council will upgrade the estate roads and carry out other site improvements to ensure businesses have all the services required.

Yesterday Moray councillors inspected the progress of the works and were briefed on long-term plans for the business park.

“There is clearly a steady stream of entrepreneurs in this area that need premises to get started, and I’m delighted that Moray Council can play its vital part in supporting them.

“We all know money is tight, but we have to take a long-term view of the area’s development, and supporting the creation of well-paid jobs is a vital part of that strategic role.”

On completion of these projects the Waterford Circle Estate will be effectively fully developed and fully let, leaving no further land for future business expansion. The council is currently investigating other sites in the area for more industrial/commercial development in Forres.

Councillor John Cowe, chair of the Economic Development and Infrastructure Committee and the Moray Economic Partnership, said the development was a welcome sight for the local economy.

“Business units in Forres have been virtually fully let for over 10 years, with smaller factory units rarely being vacated and strong demand leading to quick re-lettings whenever any became available,” he said.

“This demand was clearly demonstrated when the Phase 1 units at Waterford were fully pre-let at completion in January 2014.

"They are let at commercial rates, allowing a return to the council that can then re-invest in other such developments for business.”

“Not only is it a great financial investment for the council, it provides much needed accommodation for businesses in the Forres Area.”

The total floor space created for new businesses is 500 sq mts. Experience from other industrial lettings shows that up to four jobs are created for every 100 sq mts, which mean the new units could provide up to 20 new jobs when at capacity.

The buildings are being constructed by local firm Darroch and Allan (Joiners & Builders) Ltd, and work is within budget and on target to complete at the end of February 2016.

The new units will provide flexible space for a variety of business uses, and interested parties can obtain details on the Council’s website (www.moray.gov.uk/estates) or by phoning 0300 1234566. 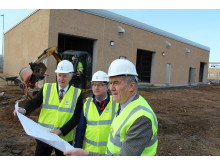 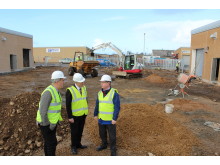 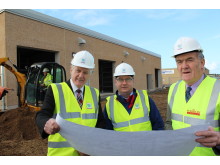