Work to keep residents and businesses from flooding in an Elgin suburb has been completed by Moray Council.

The £55,000 alleviation scheme will prevent flood waters from the Longmorn Burn flowing down the road to houses next to the Longmorn Distillery when it over-tops.

To reduce the land area taken up by the bank structure recycled plastic sheet piles were used, which are sunk into the ground by a metre and protrude from the ground by the same measure.

A small grassed embankment has been built up on the dry side of the sheet piles, which strengthens the piles during a flood event and will create a more pleasing finish for local residents.

The sheet piles follow along the road from the existing flood wall for approximately 90 metres and tie in to the  bank.

The works were being carried out by Moray Council teams, and is the first time they have used plastic sheet piling.

Chair of the council’s Economic Development and Infrastructure Committee, Cllr John Cowe, said the modest investment will have a big impact on residents of six properties and businesses affected by recent flooding.

“The council’s decision to provide this protection will provide peace of mind to those that live alongside the burn, and give continuity to the distillery and other operations during times of flood risk,” he said.

“I delighted that this project has been successfully and sympathetically carried out by our own teams, from survey through to design and construction. It’s good to know we have such a wealth of experience and ability in the council.”

The project follows other localised flood alleviation schemes undertaken by the council in Dallas, near Forres and Newmill, Keith in response to flooding episodes. 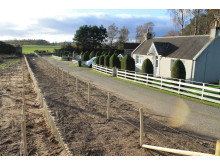 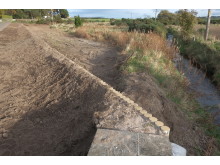 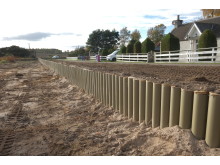