An Elgin primary school is set to welcome a former pupil as its new head teacher.

Stuart McQuaker, 35, will take up his post at West End Primary following the summer holidays.

He will follow in the footsteps of his predecessor, Gordon Barron, who was also a West End Primary old boy and who retired at Easter after 24 years as head teacher.

The appointment follows a campaign by parents via social media, including a film made by parents and pupils seeking candidates. The You Tube film attracted thousands of views and widespread press coverage.

You can see the film here

Mr McQuaker spent three years at the school after his family moved to Elgin from Glasgow.

He spent his secondary years at Elgin High School before studying at Robert Gordon University in Aberdeen.

After working with a building society for a number of years he returned to university to complete his teaching qualifications and spent his probationary year at New Elgin Primary School.

Six years ago Mr McQuaker was appointed an education support officer based at Moray Council headquarters with responsibility for classroom ICT and technology.

More recently he has been seconded as an acting depute at Millbank Primary School in Buckie and as acting head at Burghead Primary School.

He is married to Lori, an educational psychologist who he met while he was working in New York during his student days.

Mr McQuaker said he was looking forward to taking up his new post at the start of next session.

"It means that much more to me because I was once a pupil here myself," he said. "There can't be many schools with successive head teachers who can claim to be former pupils." 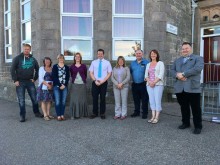