Councillors today got their first close-up view of a new custom-built harbour dredger being built for Moray Council.

The £2.4million vessel will be the only dredger in Scotland operated by a local council.

The 25.7m(90ft) dredger is under construction at the Macduff Shipyard Ltd fabrication facility at Buckie, and is expected to be completed next spring.

It will service the council-owned harbours at Buckie, Burghead, Hopeman, Findochty, Portknockie and Cullen as well as being available for hire to coastal councils across Scotland.

A key feature of the new dredger is that it can access and clean out smaller harbours that have silted up.

The vessel is being built as a replacement for the Shearwater, which the council scrapped and sold two years ago after many years of service.

The new dredger, which was designed by Macduff Ship Design Ltd, will be capable of dredging to a depth of 8m (27ft) with its bow-mounted excavator.

They were shown round by site manager Stuart Mack and watched work under way on the stern of the vessel and the wheelhouse.

Councillor Cowe was delighted to see work progressing so well and said it was also gratifying to see the dredger being constructed just across the road from Buckie harbour where it would be a regular sight and its capabilities would be put to good use.

“Buckie harbour is a massive asset to Moray in terms of economic development and keeping it accessible to commercial traffic is of vital importance,” he said.

“This is a significant investment in our harbours and the local economy by the council, and highlights this administration’s commitment to the prosperity of Buckie.

“I look forward to returning regularly as the new vessel takes shape and to see her completed and operational next year.” 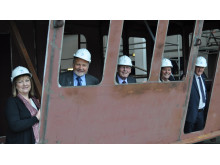