Public consultation gets under way this week on proposals to establish a new primary school to serve Elgin’s fast-growing south-east suburbs.

Although an exact site is still to be finalised and construction will not be completed until 2018, pupils at the new school could will begin lessons in temporary accommodation at East End Primary School annexe from next August.

A catchment area for the new school has been finalised as part of a recent review of primary school zoning in Elgin.

Once it is located at its permanent site, the school will also include nursery provision.

The public consultation will continue until February 4 and will include consultation meetings at Elgin Town Hall on Wednesday, January 6 from 2pm to 3.30pm and again from 6.30pm to 8pm.

The consultation document can be found on the Moray Council website at www.moray.gov.uk and is also available from Moray Council headquarters, Elgin library and New Elgin and East End Primary Schools.

A report on the outcome of the consultation will go to the council’s children and young people’s services committee on April 27.

Moray Council's plans to establish a new primary school at a temporary site within the East Elgin campus has been backed by Education Scotland.

A senior Moray councillor has spoken out in response to concerns expressed by parents at an Elgin school campus where it is proposed to locate temporary accommodation ahead of the opening of a new primary school. High-res pics in related material section free to use. School roll in 1999: 369 2000:333 2001:285 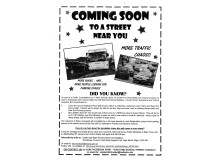 Copy of a flyer distributed to local residents to the East End Primary school. This contains misinformation concerning access and parking...