The biggest and farthest reaching transformational programme in Moray Council’s history has officially come to an end.

This week’s update to elected members on the progress of Designing Better Services (DBS) marked the formal closure of the programme after seven-and-a-half years. Read the full report here.

In that time it has achieved savings of more than £10million with ongoing annual savings of nearly £3million.

Major milestones along the way have included the conversion of the headquarters annexe building from a disused supermarket, allowing some 16 satellite properties in Elgin to be closed. The finished building was refurbished to the highest 'green' standards, reducing the council's carbon footprint. The refurbishment of the main HQ building was also completed to accommodate some of the teams from the closed satellite offices.

Among a host of other innovations, DBS has also seen the introduction of pool cars, the creation of the contact centre, hot-desk work patterns and the implementation of opti-time work scheduling for council house repairs.

DBS was launched in the spring of 2008 with the formation of an eight-strong team drawn from departments across the council, headed by programme manager David Morris who has seen the project through from start to finish.

In his report to the policy and resources committee this week, David summed up the programme’s impact when he said: “The council is a considerably different place from when the small DBS team was created in March 2008.”

Members from all sides paid tribute to David and his team for their work on DBS.

In his own appraisal of the programme, council leader Councillor Stewart Cree said: “At the outset of the DBS programme, elected members were asked to take a leap of faith and commit considerable resources to the modernisation of a range of services within the council with a view to making financial savings.

“As this extensive programme draws to a close, I believe that our trust has been rewarded and that the programme has demonstrated the immense value of having sufficient courage to look at how things can be done differently and to empower officers to implement such changes.”

Councillor Cree added: “The programme set ambitious targets and while it is true that not all of these have been attained, there is no doubt that the savings of £3million, which will accrue annually, more than justify the efforts that have been taken.

“I am immensely grateful to all those who took part in DBS, either directly or through the DBS teams or by changing their work practices to reflect the new processes that arose following the new ways of working which have been introduced.

“I can only hope that the council will continue in this way to develop a culture of continual appraisal and assessment.”

Moray Council made a working surplus of more than £5m in the last financial year, figures presented to councillors today have shown. 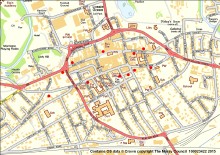 Rationalising office accommodation in Elgin has led to savings for the taxpayer, buildings for community use and easy access for customers. 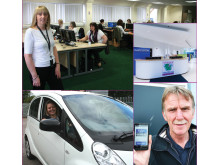 Montage of services and changes as a result of the Moray Council's Designing Better Services programme.