There are changes afoot in the world of waste as the Council moves towards a ‘zero waste’ future. While producing zero waste might sound ambitious, saving money while saving the planet is all in a day’s work for the team at the Moycroft Waste Transfer Station (WTS).

The Moycroft WTS is the central collection point in Elgin for household rubbish, recycling, and garden waste disposal. Have you ever wondered what happens to your recyclables once the lorry has taken them away? Bottles and cans arrive at the WTC before going to the Material Recovery Facility (MRF) in Lossiemouth, which has been open since May 2013. A dedicated team there sorts through the recyclables, separating the plastic from the light steel and the aluminium. Once sorted these are sent to re-processors from whom the Council receives an income per tonne of materials – and unbelievable savings can be made just from recycling your unwanted waste. While plastic and steel don’t have much of a resale value (aluminium cans do – £650 a tonne!) the savings made from keeping them out of the landfill are huge. Moray Council saves £82 per tonne in landfill tax when it keeps waste out of landfill, and when you consider that nearly seven tonnes of plastic bottles, cans and aluminium foil and metal recyclable materials are collected and brought in to the depot for recycling every single morning, the figures soon add up. Recycling makes a saving of £574 per day, or £2,870 a week, £11,480 per month – which works out to a staggering £137,760 per year!

It’s with these figures in mind that the team’s frustration is tangible when they see products that could have been recycled – like plastic drinks bottles and food tins – come tumbling out of bin lorries alongside normal rubbish destined for landfill.

“If you look at it, just from here I can see loads of plastics and metals. That tells you that there are still people needing a bit of education,” says Donnie Mclean, Recycling Assistant. “Residents and businesses, have bins for the full range of dry recyclables so there’s no real excuse for it anymore. But unfortunately, not everyone wants to recycle.”

“We still get the odd person who says ‘what’s the point in all this? It all goes in the same hole anyway’ but nothing could be further from the truth. Everything collected for recycling is reprocessed.”

Copper wire from the cables of household electrical goods can be recycled. The team is also responsible for the uplift of large domestic appliances, so each fridge, oven, or freezer is brought in to the depot, then sent on to Perth to be taken apart so its plastic, metal and glass component parts can be recycled.

Paper and glass are the other well-known materials for recycling. As you might expect, the amount of cardboard waste that is collected doubles at Christmas time with all of the festive packaging, and the glass recycling area was full to overflowing after Christmas and Hogmanay! A massive 75 tonnes of glass is collected every week, which starts its lifecycle of reuse over again by heading down to Edinburgh for onward shipping to Portugal, where it is ground down to be re-used as glass again or as aggregate.

The contents of your brown bin are equally valuable. Garden waste is processed through an industrial shredder called ‘The Beast,’ due to its size and power. The shreddings are subject to treatment in a specialised process undertaken by contractors in New Deer. Every tonne of this quality compost material that doesn’t go to waste by ending up in the landfill adds up in savings.

With the current landfill site at Spey Bay near Dallachy scheduled to close in 2020, there is an urgent need to get everyone into the habit of recycling more. ­In 2013, a shocking 51% of materials sent to landfill could have been recycled! Placing the wrong materials in the wrong containers cost the Council over £3,000 per day that year, a total of £1.2 million in additional landfill tax fees – the same cost as 270 primary school places or 210 secondary school places per year.

The Waste (Scotland) Regulations 2012 Act has placed a ban on sending biodegradable waste to landfill by the end of 2020. This means that anything that can't be recycled (the contents of your green bin) will be banned from landfill after this date. Our landfill site at Nether Dallachy near Spey Bay will have to close.

To address this, the Council’s Economic Development and Infrastructure Services (ED&I) Committee has joined forces with Aberdeenshire and Aberdeen City Councils to build an Energy from Waste (EfW) facility in Aberdeen. This means that all non-recyclable waste will be transported there after 2020. Although there is a waste transfer station at Moycroft, it will be too small to handle the increased volumes of waste (estimated at an additional 8,000 tonnes per year) that will need to be transferred to the new facility in Aberdeen. 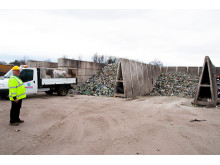 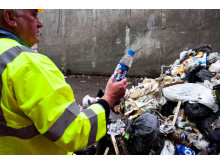 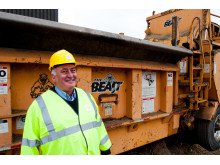