It feels ironic; we’re at the heart of food and drink production in Scotland; yet most people couldn’t point to us on a map. For those who are wondering, we’re that petticoat tail-shaped slice of Scotland which lies between the Highlands and Aberdeenshire, extending down from the Moray Firth.

But for anyone who doubts the important contribution Moray makes to the food and drink industry, I offer but one statistic. Twenty two million litres of whisky travel south down the A95 – known as the whisky road – each and every year.

It begs the question about how much is spent on improvements to that vital road, considering the tax take from that one cargo alone, but that is perhaps an argument for another day.

In 2014, Scottish food exports passed the £1.1 billion mark for the first time, with total food and drink exports valued at £5.1 billion.

And Moray makes a vital contribution to that overall figure, as I have discovered in my travels round the region as chairman of Moray Economic Partnership

When I was running my own company – Lossie Seafoods – it would be fair to say I was so tied up with what was happening in my own business I rarely took a good look at what was going on around me.

I knew we were producing a brilliant product and satisfying our customers but I could not have told you much about what else was happening in my sector or region except where it directly impacted on us.

Since retiring from my business and taking on the role of representing the economic interests of Moray, I have been able to take a much wider view. And it has been an eye-opener.

I always knew Moray had a great reputation for food and drink and was home to some of the most iconic Scottish food brands, companies known throughout the world.

But when I started to look at the breadth and depth of our range of products even I was surprised.

When I meet people – here and abroad – I confidently tell them they will have consumed something from Moray in the past year.

Most look at me sceptically, particularly as many of them have never heard of Moray. But once I start to tell them about our fantastic products they usually accept I have a point.

Our fantastic Speyside whisky obviously ticks the box for a lot of people.

Some will recognise the distinctive single malts produced by smaller distilleries like Glen Moray or Benromach while others will know about big selling brands like The Glenlivet or Glenfiddich.

But even if they are not whisky connoisseurs they are still likely to have had a taste of Speyside whisky in any the hundreds of blended varieties that make up the bulk of whisky sales worldwide.

But as well as those 22 million litres of whisky, there are growing volumes of local beer travelling down that same road, crafted using the same natural products which make our whisky so special.

For the abundance of water and fantastic malting barley – essential for the whisky industry – also makes it the perfect place for brewing.

Moray is at the forefront of the renaissance in craft breweries, and beers from the Speyside Craft Brewery, Windswept, the Spey Valley Brewery or Brewmeister are increasingly seen across the country in pubs and shops.

And if you are teetotal, Moray is still making first class produce for you.

Baxters and Walkers, two of our largest food producers, have a worldwide reputation. And sitting alongside these flagship companies, we have hundreds of smaller companies manufacturing a wide range of products.

Sit down for dinner and we could well have provided everything you eat. Some of the finest smoked salmon in Scotland, for a starter.

Move on to a fantastic rib roast of beef reared on some of the best grass pasture in the country. Fancy ice cream for dessert?

We’ve got a wealth of ice cream makers from the traditional manufacturers such as Miele’s of Hopeman to the newer kids on the block such as Great Taste Award winners, the Fochabers Ice Cream Parlour.

Some of Moray’s food and drink producers enjoy an international reputation.

We’re determined to continue to build on that and it’s particularly exciting to see new businesses capitalising on our reputation.

So the A95, heading south from Elgin is not simply the whisky road, it’s also the shortbread road, soup road, craft beer road, even an ice cream road.

People may initially be sceptical about my claim they will have consumed something from Moray in the past year, but few disagree once I tell them a little more about the fabulous part of the world I am proud to call home. My next task is to ensure they can point to us on that map. 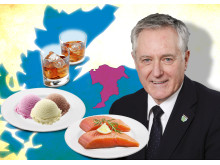