Cycling Scotland’s Annual Cycling Monitoring Report launched yesterday (16th February), has found that cycling rates in Moray are higher than the national average, with 1.9% of the population choosing cycling as their main mode of transport.

The report, which examines a range of data and statistics from both a national and local point of view, found that the top three wards for cycling to work in Moray were Forres (5.79%), Heldon and Laich (3.78%) and Elgin City North (3.69%), while the percentage of children stating that they cycle to school is an impressive 7%, against the national average of 5%.

“Moray has made great strides in encouraging more people to cycle and has great potential to go further with sustained investment in infrastructure, cycle training and other initiatives to encourage and enable people of all ages and abilities to enjoy cycling.”

Cllr John Cowe, chair of Moray Council’s Economic Development and Infrastructure Committee, said, “I’m pleased there has been an increase in cycling rates in Moray. We have recently incorporated a 4.5 mile cycle route into the Elgin flood alleviation scheme between the nearby towns of Lhanbryde and Elgin, and have many other formal cycle routes in the area, all of which helps more people to get on their bike and enjoy cycling locally.”

Other areas reporting high levels of cycling as a main mode of transport include Dundee City (4.2%) Edinburgh City (4.2%), Orkney Islands (3.4%), Highlands (3.1%) and South Ayrshire (2.2%). Within the Highland area, Inverness wards hold all three top spots for cycling to work with Inverness Ness-side at 6.24%, Inverness Central at 5.93% and Inverness Millburn at 5.43%.

Nationally, cycling as a main mode of travel in Scotland was estimated at 1.4% in 2014 while the volume of traffic was 339 million vehicle kilometres travelled, a 46% increase since 2004. In addition, 11% of adults participated in cycling in the previous month.

Produced by Cycling Scotland, the Annual Cycling Monitoring Report provides insight into national and local cycling trends and statistics across Scotland. The report presents a national picture covering topics including levels of cycling - particularly cycling to work or study - cycle training, perceptions of cycling, road safety and delivery of cycling projects related to the Scottish Government’s Cycling Action Plan for Scotland 2013. Download the Annual Cycling Monitoring Report at www.cyclingscotland.org/policy/monitoring, or open the pdf version on this page. 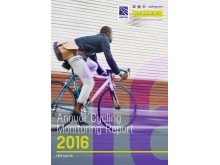