Called the Future Nurse programme, the Grampian-wide initiative is designed to alert young people to nursing and demonstrate what’s involved in the vocation.

A recent report by the Organisation for Economic Co-operation and Development (OECD) stated that career ambitions and choices are already limited at age seven by ‘ ingrained stereotyping about social background, gender and race’. Link here

Launched at Linkwood Primary in Elgin, the Future Nurse programme is a new initiative to help address the common stereotypes around nursing and tackling the gender imbalance in the NHS. The event, which will be rolled out to all primary schools in Moray over a three-year period, supports the Moray Skills Pathway aim of generating curiosity about future careers and understanding the world of work at the earliest opportunity.

Medical staff from Dr Gray’s Hospital in Elgin will be at the school all morning to talk to the young people and show them what their jobs entail. Pupils will be provided with nursing ‘scrubs’ and shown how to perform some of the tasks undertaken by nurses, such as taking blood pressure.

Moray Council’s Head of Schools and Curriculum Development, Vivienne Cross, said: “We’re delighted to be working with our NHS partners and be the pilot area for this initiative.

“If we can open the young people’s minds to the broadest range of careers, we could raise aspirations and an understanding of the range of careers available in Moray. Health and Life Sciences remains one of our biggest industries in Moray and is likely to remain that way, so the sooner we show young people this option the better.”

The event will see 67 children who will be issued a #FutureNurse uniforms and ID badge experience a range of roles these include paediatric nursing, chiropodist, paramedic, mental health nursing and public health. The hands-on activities will allow the children to explore the roles and ask questions about the jobs both the male and female staff from NHS Grampian undertake.

The project was started by Colin McNulty, senior nurse manager at NHS Grampian.

He said: “The typical nurse costume for a child comes with a cape and hat, but these haven’t been used for decades. The accessories extend to a thermometer and a fob watch, suggesting nurses do little more than take temperatures or measure pulses.

“The reality of modern-day nursing couldn’t be further from this, but first impressions matter. If this is what very young children are learning about nursing then they may decide it is not the job for them in years to come. As a Registered Nurse, I wanted to change the message.” 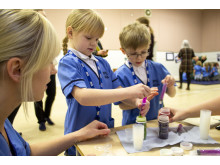 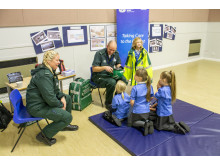 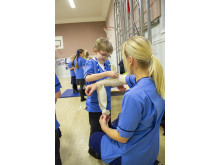