The children that came up with the winning name for Moray Council’s new £2.5million dredger got their first sight of the vessel in a VIP tour yesterday

Pupils from Buckie’s Cluny Primary came up with the name ‘Selkie’, a mythical Scottish creature that resembles a seal in the water but assumes human form on land.

Schools from all the coastal communities in Moray were encouraged to entre to the competition, and last week received their runner-up prizes.

But yesterday- in addition to their prizes of books, the Cluny youngsters were given an exclusive preview of the 90ft vessel by Buckie-based Macduff Shipyards. As part of their tour they all signed their names on the dredger’s giant propeller blades with long-lasting ink pens.

The 250 tonne dredger is a replacement for the council’s former vessel, the Shearwater. That was decommissioned and sold as scrap two years ago. Moray Councillors agreed to fund the replacement just prior to that, and the contract was secured by Macduff Design and Shipbuilding after a competitive tender.

Class teacher, Shona Cowie, said the youngsters learned a lot about the ship.

"They were delighted when the name they chose was selected," she said.

"All the class had been studying Scottish mythical creatures, and the name Selkie seemed to be right for the new ship built in their town.

"We all think the ship's awfae bonnie."

After their tour, the youngsters all signed their names on the ships huge propellers with a waterproof marker.

The dredger still has to be floated and taken through a series of sea trials before she is formally handed over to the council.

This will happen on Friday May 6 at a naming ceremony in Buckie harbour, when the Lord Lieutenant of Banffshire, Mrs Clare Russell, will name the ship in the traditional fashion by breaking a bottle of champagne over her bow.

The pupils attending were: 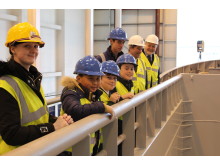 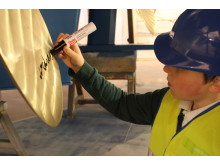 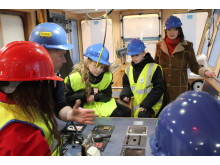 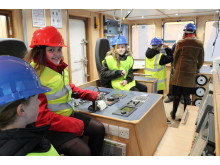 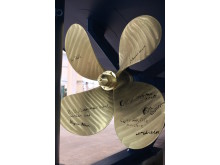 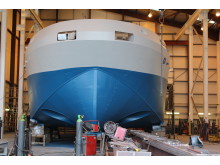